Shortly to the photos of plants by Hans Havel. They do not correspond in appearance to the plants of E. tuberculosa subsp. varicolor, as they are commonly known nowadays, but they are very similar to the plant in the photo of the first description copy by Ernst Tiegel. I attach below a photo from 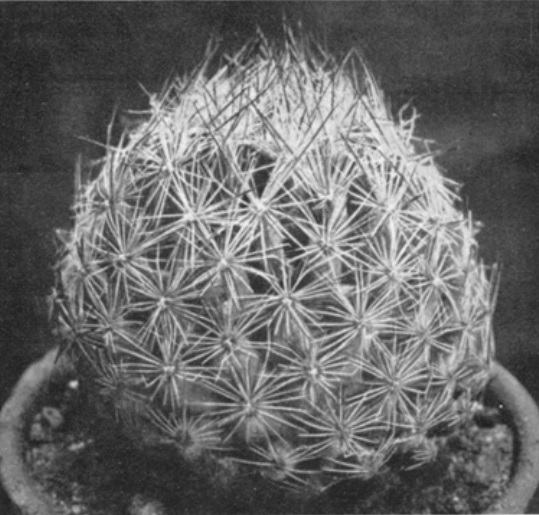 Hello,
the new sightings are pretty good....Aaron Balam showed them to me on his phone a year ago. On our last trip we saw them in the mountains around San Antonio de Bravo (northwest of Ojinaga), and then in the area between Manuel Benavides and Camargo. To the east I see limits in the Sierra del Carmen (La Cuesta), Coah. .....I haven't encountered varicolor further out, but purely theoretically it could jump a few more miles. In northern Mexico it is widespread..... it is very abundant and occupies all suitable substrates.
j.

I was in 2010 on the site of CC1824 Esc. chihuahuensis, which is of course wrong, it is a very simple varicolor. See the discussion of "Is CC1824 really a Escobaria chihuahuensis subsp. chihuahuensis ?".
Below you will find two photos, one of a varicolor and one of a location. 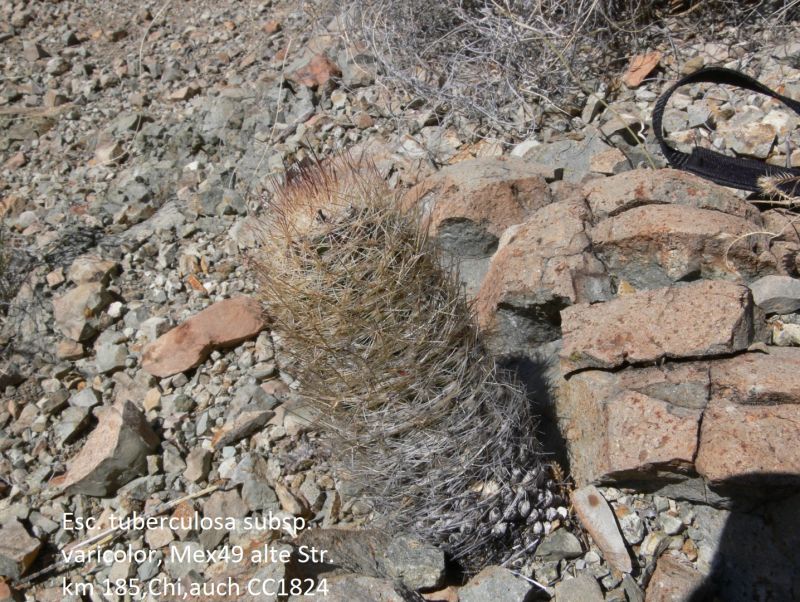 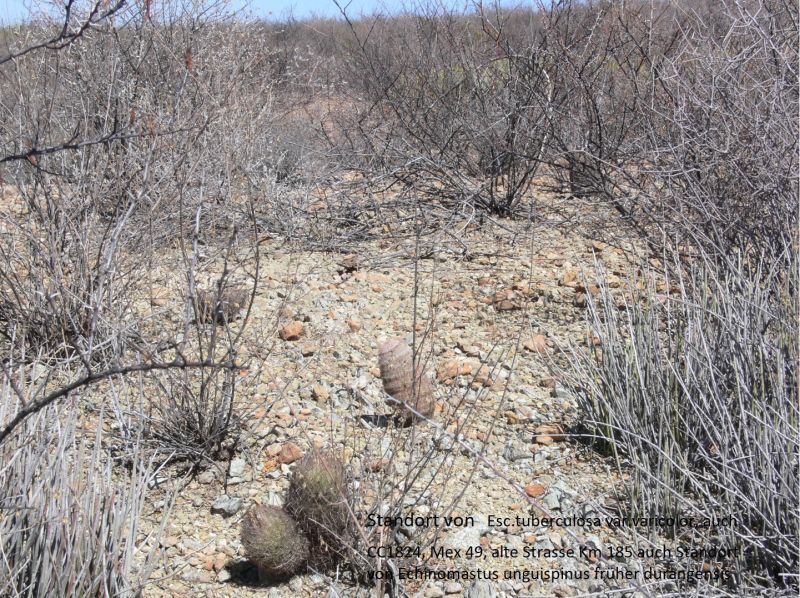 Varicolor is not rare, whenever you don't find any limestone or sediment with limestone content, there is varicolor. So you have due south of Marathon, where there are of the diatoms the deposits, varicolor. Here I would like to introduce you to a varicolor, in front of which I stood for some time and wondered what varicolor this could be. This one did not look at all like the usual varicolor. 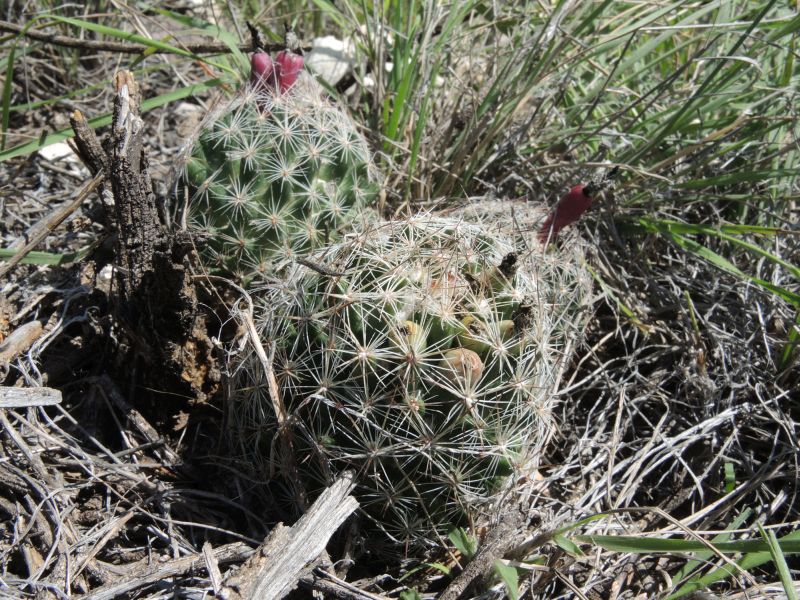 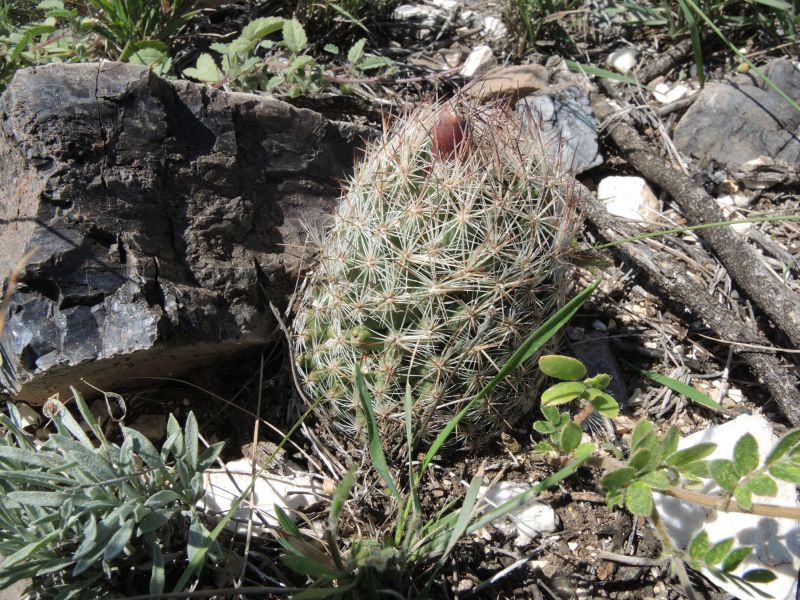 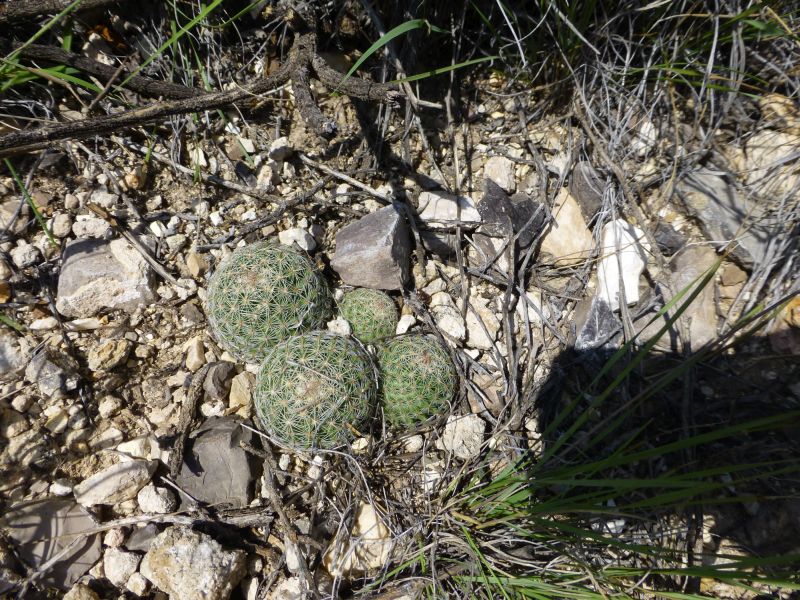 Last year I was preparing a text for Atlas kaktusu 36 (2021) on the taxon Escobaria tuberculosa subsp. varicolor. Among other things, I tried to specify the range not only in Texas (USA) but also along the border in the state of Chihuahua (Mexico).

Ecology and distribution
Plants of Escobaria tuberculosa subsp. varicolor grow mainly in mountain ranges of volcanic origin or on sites with bedrock of igneous rocks, in stands of oaks and junipers, on rocky grassy slopes and on sites with bedrock of novaculite (silicate), e.g. in the Marathon Basin and Solitario. The type locality was not mentioned in Tiegl's description. The neotype was determined by Benson (1969) from samples collected by Warnock in the hills south of the town of Marathon, Brewster Co., Texas, at an elevation of 1160 m. The main area of occurrence is then reported in the Trans-Pecos region, primarily in Presidio, Jeff Davis, and Brewster counties, and more rarely in southern Pecos County. However, the range is larger and extends into the Mexican state of Chihuahua, where it has been confirmed in Sierra Rica, and is also thought to occur in areas of the state of Coahuila adjacent to Texas. The plants grow at altitudes of 700-1670(-1980) m and the accompanying vegetation, apart from the aforementioned grasses, shrubs, junipers, oaks and pines, is very often made up of Opuntia engelmannii, O. imbricata, O. chisosensis, Echinocactus horizonthalonius, Echinocereus russanthus subsp. russanthus, E. gurneyi, E. coccienus subsp. transpecosensis, E. stramineus, Mammillaria meiacantha and, among other succulents, e.g. Agave havardiana or Dasylirion leiophyllum. In the vicinity of Marathon, it also grows in habitats together with Escobaria hesteri subsp. hesteri and e.g. Thelocactus bicolor subsp. flavidispinus.


What was my surprise, however, when I discovered newly listed records of this taxon in the Mexican state of Chihuahua, in the area east of Ciudad Delicias, on iNaturalist. This locality is about 100-150 km southwest of the previously known localities. Below is a map of the occurrences of E. tuberculosa subsp. varicolor and links to individual records. 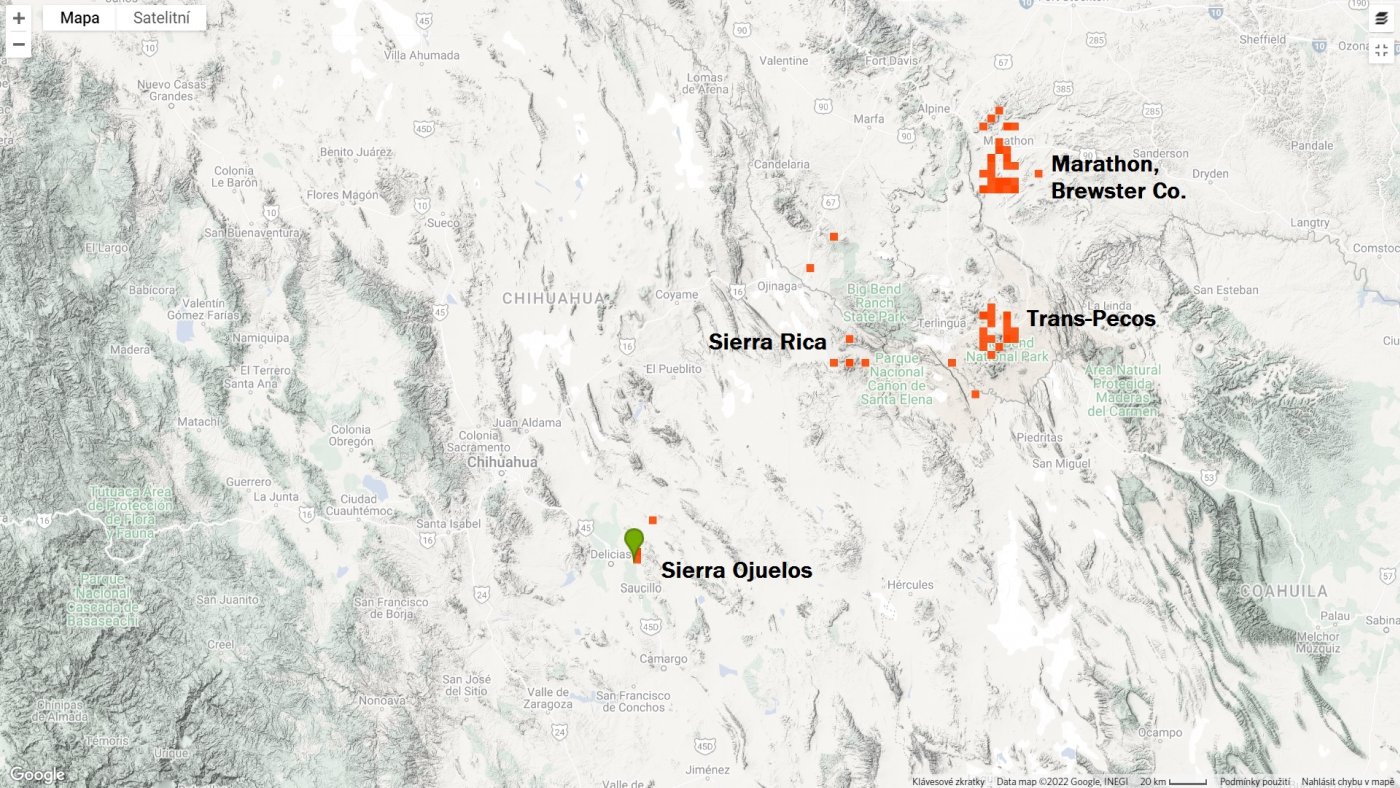 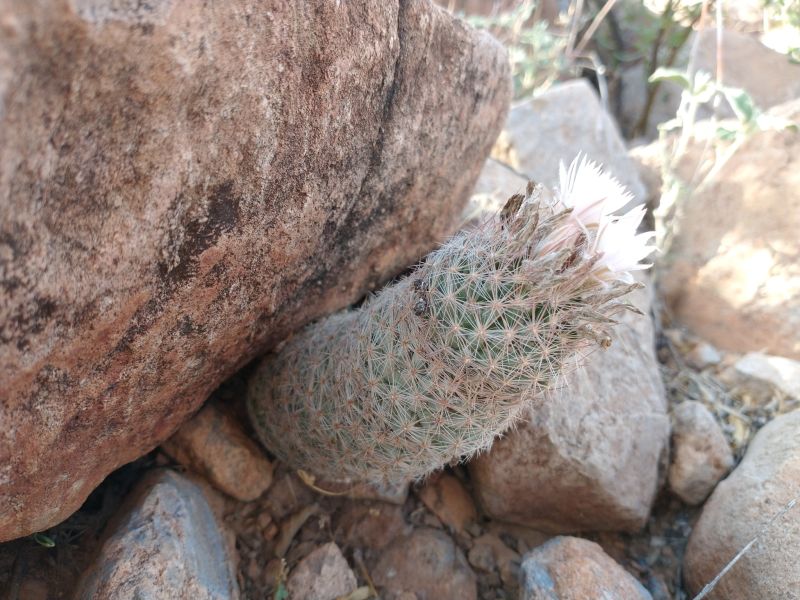 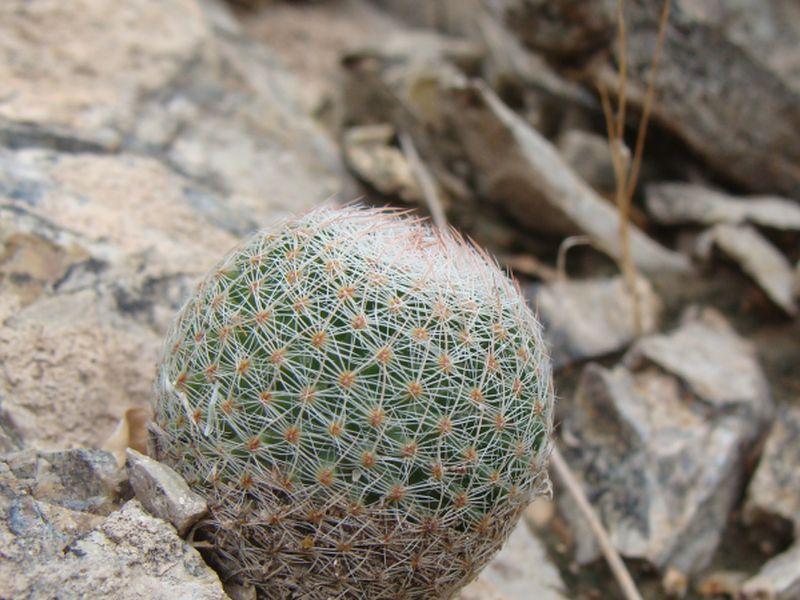 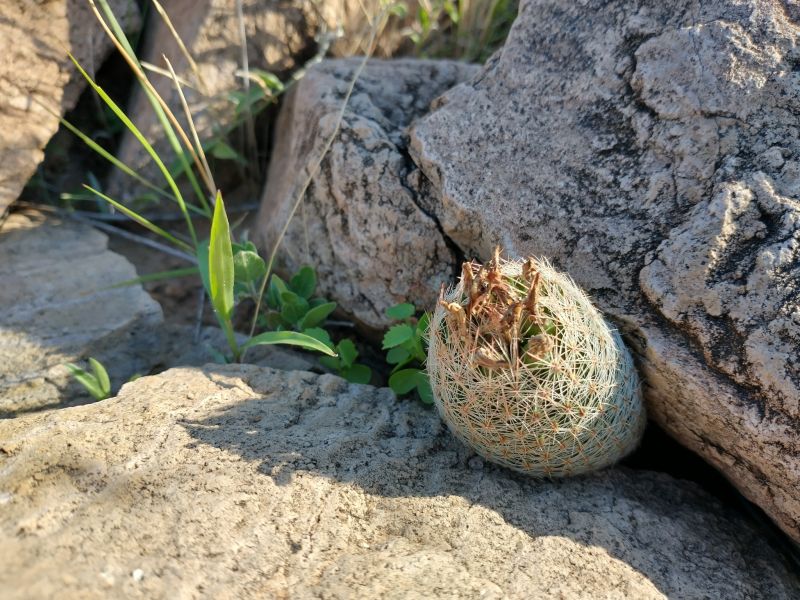 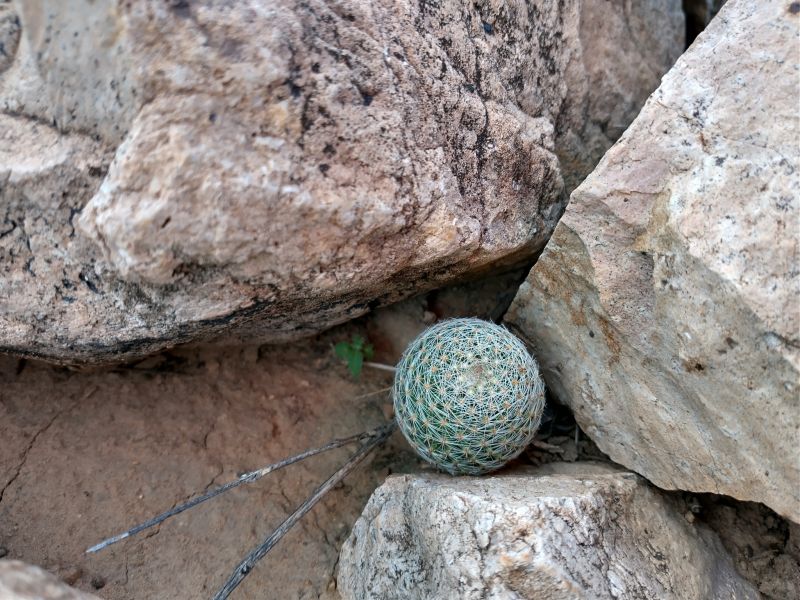 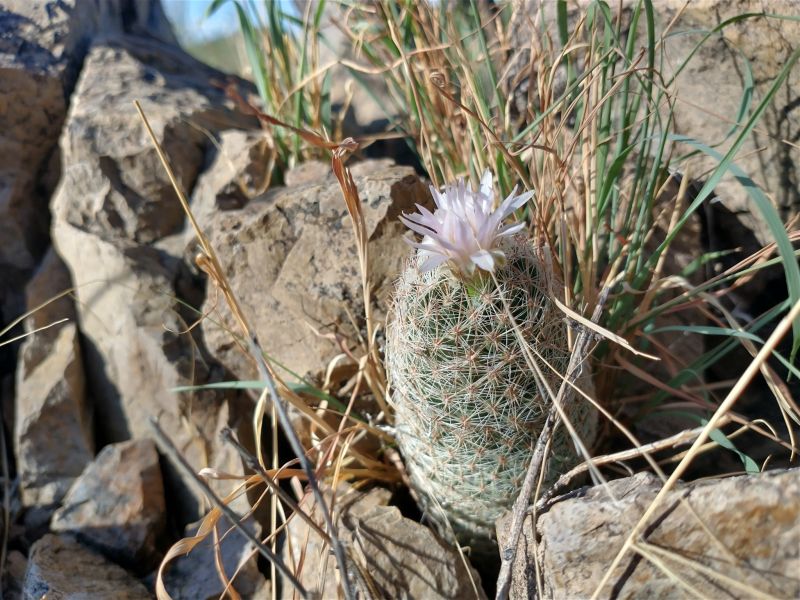 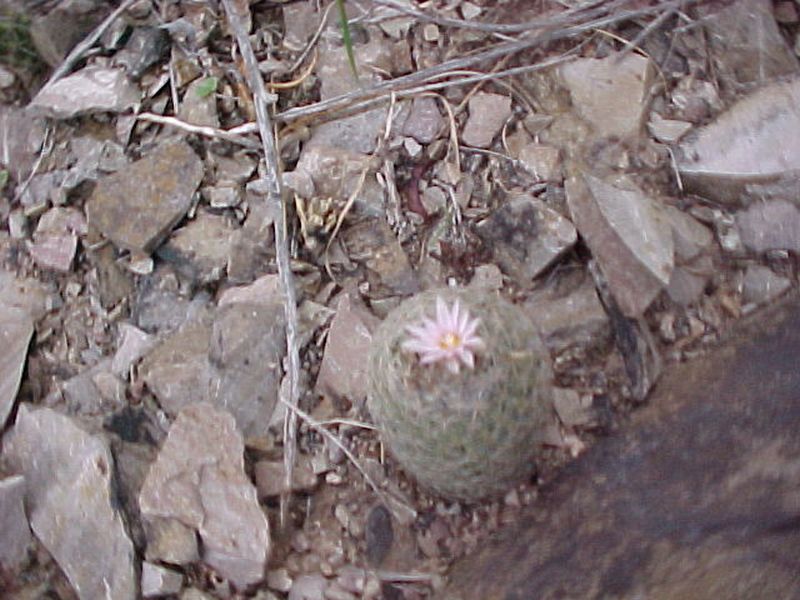 As a matter of interest, I looked up geological maps of the state of Chihuahua and found that rhyolite and rhyolite tuff form the bedrock in the Sierra Ojuelos area. In the Sierra Rica area, igneous rocks of various types (including rhyolite) and acid tuffs (rhyolite ash tuffs from the San Carlos caldera) are also listed. The photographs show that the plants grow in crevices in the rocks or in gravelly soils without a significant proportion of clayey soils.

Since there are more mountain ranges formed by volcanic rocks between Ciudad Delicias and Sierra Rica (extending to the Trans-Pecos and Marathon region, Brewster Co., Texas), I wanted to ask if anyone has observed these plants elsewhere.

Thank you in advance
Jan M.