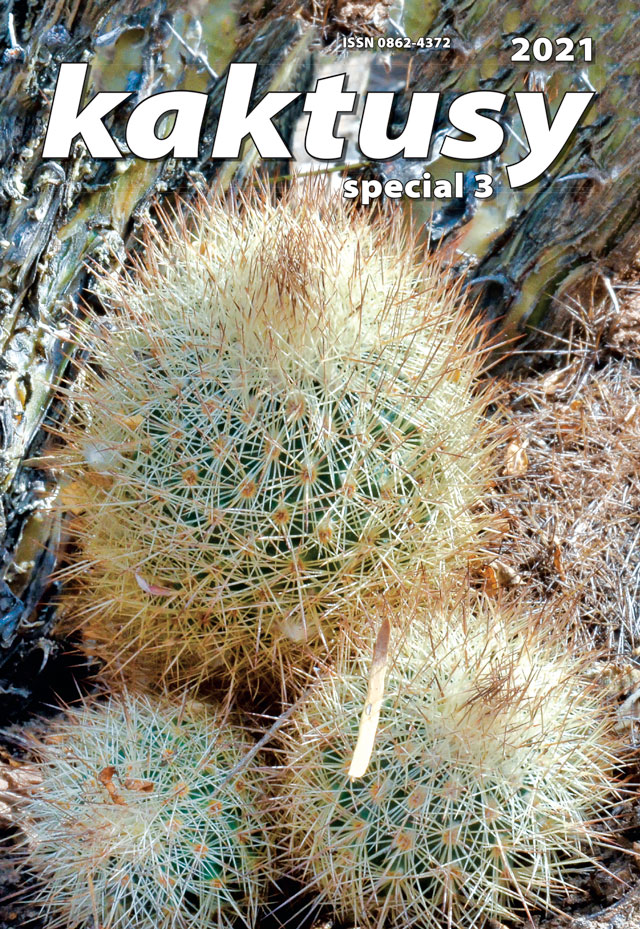 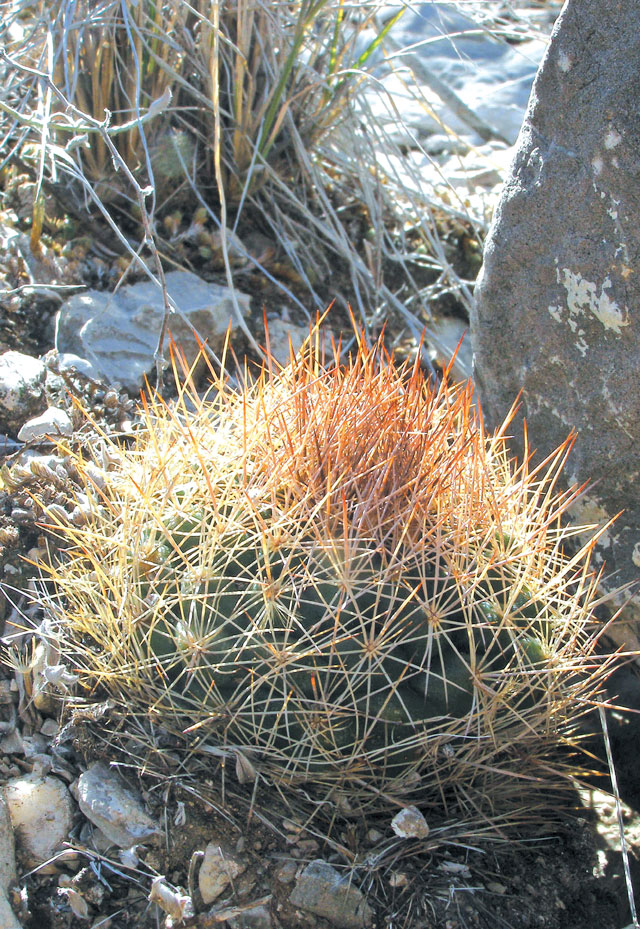 You can order the special issue from Ing. Lubomir Berka (berka.frailea@seznam.cz) or Ing. Jaroslav Vích (jaroslav.vich@gmail.com).

Description
From the subsp. roseanum, this differs in that it has a larger, more robust stem that grows individually and only sprout when it is old or when the crown of the plant is injured. The stem is up to 150 mm long and up to 70 mm in diamefer. The epidermis is distinctly bluish.
The spines are stronger and longer than the type subspecies, yellowish gray to white at the base with a gradual transition to dark to black at the tip. The spination, which differs from other subspecies, is already visible in seedlings.
The flower is also larger than that of the type subspecies, with the outer petals having significantly darker colour shade.
The fruit is fleshy, green, larger than the type subspecies.

A detailed description of the subspecies menzeliorum will be published immediately after all observations have been completed.

Distribution
At the subsp. menzeliorum ined. are plants from populations found around the archaeological site of El Chiflon and the sites at El Mesón (Plan de Ayala), in the State of Coahuila, Mexico. Based on numerous discussions, intensive literature studies and comparison of the plants in the culture, it can be claimed that the locations mentioned include identical plants.
The plants grow on limestone hills and form the accompanying cactus vegetation Astrophytum capricorne subsp. minor, Epithelantha bokei, E. rufispina, Mammillaria chionocephala, Thelocactus bicolor, T. rinconensis, Rapicactus (Turbinicarpus) beguinii subsp. senilis and other.

Remerks
The name was chosen in honor of Jürgen Menzel, who made a significant contribution to clarifying the origin and, above all, to the preservation and dissemination of the plants in culture.

The plants now classified as subsp. menzeliorum ined. are named, first appeared in catalogs by H. Künzler in the 1960s under the provisional name Escobaria roseana var. robustior. However, the location was not specified at the time. They owe their existence in culture almost exclusively to the dissemination of seeds from Jürgen Menzel's collection. During his stay in Hamburg, he grew the mother plants from Christa Roberts seeds. Later correspondence between Stefan Nitzschke and Jürgen Menzel revealed that Christa Roberts' plants came from Horst Künzler's early collection.
The plants described were also collected by Ch. Glass and R. Foster in the vicinity of the El Chiflon archaeological site, Plan de Ayala, Coahuila, Mexico. The collection under number GL. & F. 3755 took place in March 1972, probably based on information from Horst Künzler. Ch. Glass reportedly assigned the provisional name Acharagma (Escobaria) roseana var. rosaeliasiana to the plants, the description however, the taxon was never published.

Description
Under normal conditions, the plants grow sporadically and only sprout at a later age, or only if the crown is injured. The body is significantly longer than the subspecies roseanum and menzeliorum ined. and reaches lengths of 200-250 mm.
The spines are finer than in the subsp. menzeliorum ined., in color and form they are more similar to the type subspecies roseanum.
The flower is dark pink to reddish. The outer petals have an almost red central stripe and are more discolored than the inner petals.

A more detailed description of the subspecies rudolphiorum ined. will be published later after completion of all observations and clarifications of the dissemination.

Distribution
The locality of the subspecies rudolphiorum ined. is tentatively given north of the city of Saltillo in the Mexican state of Coahuila. It is specified in more detail in the context of the description.
The plants grow on the site together with Mammillaria chionocephala and Echinocereus reichenbachii subsp. reichenbachii (syn. Echinocereus pailanus n. n.).

Remerks
The name was chosen in honor of Mario Rudolph from Bad Belzig. Thanks to him, some misunderstandings about the origin of plants have been clarified, above all he has contributed to the rediscovery of the location of this taxon.

The plants first attracted attention in Helmut Rogozinski's collection in Cologne on the Rhine. Later, identical plants with the name Escobaria roseana gigas "El Mesón" were also observed in Jürgen Menzel's collection in Mallorca and California. After a detailed investigation, however, the specified locality could be described as wrong, since the plants did not correspond to the plants known from El Mesón and El Chiflon. J. Menzel subsequently specified the origin as "somewhere north of Saltillo". The search for the origin of the plant thus led back to plants that Rogozinski found in 1988 when searching for Mammillaria chionocephala and listed in his notes under the accompanying vegetation. Subsequent visits to the site, by Mario Rudolph among others, have brought certainty that the origin is identical.

About 40 years ago, Horst Kuenzler offered Gymnocactus roseanus var. robustior in his seed catalog with this comment:
plants single and larger than type. Rare, 10 s. - 50 c.

Unfortunately, he did not provide any information about the location.

The plants grew from the sowing and they resembled the plants in the photo by J. Menzel. Unfortunately I don't have them.

In my collection I have a plant with sprouts of Acharagma roseanum and a single plant. I didn't know if they were the type forms or some other form/variety though. Can someone help?

My plants (J.Menzel) of Acharagma roseanum var. / fa. robustior are grown from seeds I received from Christa Roberts, Coolidge, AZ decades ago. The plants are large and solitary and after many years they hardly sprout. They rarely produce seeds and have stronger and darker thorns.

The plant in the picture is from Boecker (D) and it comes from somewhere north of Saltillo, Mexico. They grow even larger than the robustior, but remain solitary, and their thorns are very similar to the normal form. However, the flower color is quite different from the normal and robust form.

The name rosaelasiena probably comes from Charles Glass. It differs from the normal form Acharagma roseanum in that it is larger in body, up to 7 cm wide and up to 15 cm high. It's about 2-3 multiples of the normal form. The thorns of subsp. rosaeliasiana are longer and softer. The flowers are similar to the normal form, but the size is different. Taxon occurs around archaeological sites off El Chiflon / Plan de Ayala, Coahuila. The information from the post by J. Snicer - Escobaria roseana subsp. rosaeliasiana (n.n.?), I.N.Cact.cz, 3 (8), 2003.

Do you know anyone or have anyone these plants?